Welcome to Our Site

The 2nd East District Waterpolo Development Tournament takes place at Carnegie Leisure Centre on 28 May from 3-5pm.  Six teams of boys and girls will take part and we expect over 60 young players to descend upon the pool.  The competition will consist of 2 rounds of group games then one round of crossover games.

Teams and game schedule for Saturday:

Good luck all the players representing Scotland this weekend in Coventry at the Home International Waterpolo Event.

Dunfermline Senior women booked their place in the Scottish Championships final with a comprehensive 30-7 win over KKASC on 24 May at Carnegie.

The team was quick of the mark with 2 goals from Julia within the first minute.  Alison added to the score line before KKASC got the first goal.  3 goals from Nicola, 2 more for Julia along with goals from Alison, Claire and Toni gave Dunfermline a 11-4 lead at the end of Q1.

Aimee score inside the first minute of Q2 to extend the lead before Julia (3) and Caitlin added to the total.  Good defensive work and some great stops by goalie Chantal ensured KKASC were restricted to a single goal.  16-5 at half time.

The team picked the pace back up in Q3 with Toni scoring a penalty after just 20 secs with another goal 30s later followed by Claire and a well taken penalty by Erin.  Nicola, Julia and Niamh added to their tallies with only 2 in reply to take the period 7-2 and a 23-7 lead going into the final period.  By this time the KKASC exclusion count and penalty was starting to impact their play.

Q4 started a little more slowly and it was almost 1m 30s before Caitlin got the scoreboard going again.  Goals from Alison, Caitlin, Nicola (2), Julia (2) combined with a strong defence backed up by Chantal and her accurate distribution ensured Q4 went 7-0 to Dunfermline and a final score 30-7.

A good controlled performance where all players played their part against a young competitive KKASC team. 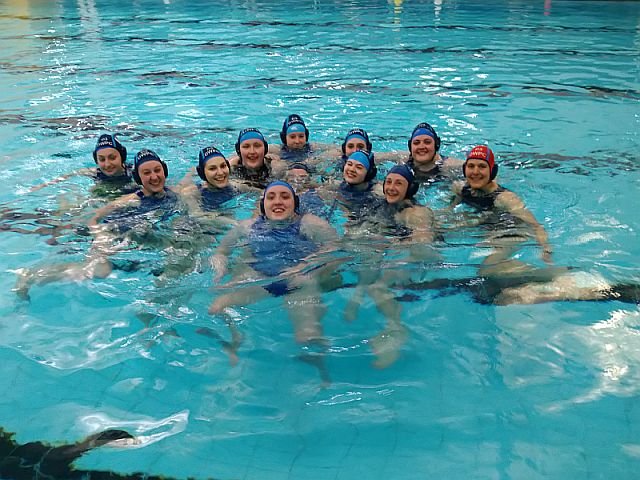 The team will now play Portobello in the Scottish Champs final on 12 Jun and will join the 2006 Girls, 2004 Girls and the Snr Men on finals day.

DWPC girls faced KKASC in the Scottish Championship semi-final on 22 May at Carnegie.  This has always been a tough and close encounter in the past and so it proved to be with both teams delivering a tense and entertaining match.

Dunfermline started the better with a goal at 6m 53secs from Hannah although KKASC equalised about 40s later.  Kayleigh got her first goal of the game followed by Aimee until KKASC got one back with 30s remaining to make it 3-2.

KKASC opened the scoring in Q2 to bring the game level.  Both teams failed to capitalize on the oppositions exclusions before Kayleigh and Imogen got goals to take the period 2-1 and Dunfermline led 5-3 at half time.  Missed chance and good stops by both keepers kept the score line down whilst Zara also made some great saves at key moments.

Despite a number of penalties and exclusions the game remained tight in Q3 as the 2 teams traded goals with Kayleigh and Sophie on the scoresheet.  Great defending ensured goal scoring counter attacks were limited as Dunfermline retained their 2 goal lead going into the final period 7-5.

Little quarter was given by either team with plenty of effort and endeavour from all the players.  A 2nd goal from Imogen and one for Georgia for Dunfermline with only 1 in reply saw the lead go to 9-6 before KKASC responded late on to bring the deficit back to two as Dunfermline held on to take the win.

With some of the regular squad missing, the game also saw a number of younger players from the 2006 squad step up and get their opportunity during the final period.  6 different players on the scoresheet however a tremendous defensive effort should also be commended.

Coach Claire was delighted with all the girls’ effort and team spirit saying afterwards “Incredibly tough and intense game. Absolutely fantastic performances across the pool from each and every player.  Very proud coach here, onto the finals we go”

Training focus will now be on preparing for the finals on 12 Jun at Carnegie when the 2006 girls take on KKASC and the 2004 girls take on Portobello/FV.